Most of today’s communication is unclear, imprecise, and unscientific. Building a remote/async-first startup, difficulties with internal company messaging revealed the importance of clear and precise communication. Consequently, I’ve studied the root causes of this lack of clarity, exploring ideas from software engineering, rationality, and information theory. I found that everyone can take a few simple steps to write more clearly, drastically improving their communication efficiency.

More specifically, I found conceptual and software tools that can augment the communication process; There are many ways to structure and refactor a message, leading to more clarity for the writer and thereby increasing the parsibility for the reader.

Communication next to sleep and eating is one of the most time-consuming things in our lives. On average, we spend a staggering 50%-80% of our workday communicating, and two-thirds of that time talking. The recent pandemic-driven shift to remote work has increased the need for effective cross-time-zone, asynchronous written communication.

This universality means that poor communication is a massive cost, source of conflicts, and productivity drain. As shown by the statistic that businesses with approximately 100 employees spend on average 17 hours a week clarifying unclear messages. This productivity drain translates to an annual cost of at least $525,000, or $5,250 per employee per year.

Companies like Amazon, which embraced written communication from the beginning, demonstrate its effectiveness and success. Influenced by Edward Tufte, a famous statistician known for his work on information design, they replaced PowerPoint presentations with written documents because they come with higher information density and enable a detailed shared context. Increasing the shared context reduces the inferential distances or the number of concepts that one needs to understand a given piece of information.

If communication is the means to shared meaning, then what are the implications of having a medium (words) that is imprecise. Comparing language, the primary communication tool of our species, to mathematics helps us understand a crucial tradeoff.

Math is precise, i.e., requires propositional truth (ex. “This sentence is a lie” is not possible), but requires a lot of effort to attain this precision.

Language is imprecise but requires low effort. Our brains can make up for the lack of precision in many situations. As receivers, we are fast at correlating and extracting logic from sentences using vast amounts of training data, i.e., the context we have acquired throughout our lives.

The individual building blocks of these mediums also differ in a crucial dimension. Math has a 1:1 relationship from expression to representation, unlike the 1:many relationship that words can have. This polymorphic property of language allows us to compress much more information into our message, levering these implied relations.

To communicate clearly, we should emulate the precision used in mathematics and propositional logic, creating unambiguous statements while using our powerful inference model to express a richness of information.

The ability to think and the ability to write clearly are inextricably linked. If you cannot articulate a thought, formulate an argument, marshal data, assimilate ideas, or organize a thesis, you will not be an effective writer.

The reader, on the other hand, can more easily comprehend the writing by reducing their cognitive load and the work needed to extract the propositions. The following strategies (or epistemic language structures) aim to increase clarity, precision, and speed of interactions.

Continuous text to premises and conclusions

“Modularity is the human mind’s lever against complexity. Breaking down a complex thing into understandable chunks is essential for understanding, perhaps the essence of understanding.”—Bret Victor

As an example, here is a message using the conditional argument structure that argues for removing a particular feature as part of a user onboarding.

The strength of a conditional argument depends on the expertise of the person relating A and B and how they are related.

In addition to fitting your writing into these top-down frameworks, you can explicitly separate your sentences into parts such as premise, refutation, example, supporting argument, and inspiration.

Your message should have one or more key points. Ask yourself, “If they walk away from this with one thing, what should it be?”

Don’t start by describing a situation or your reasoning and instead lead with the main point. Consider this paragraph:

“We must think strategically. When we consider X, things get even more complicated. Since the data does not support increasing spending on ads, after careful review, I have concluded that Y.”

Everything in this example before “Since the data” can be considered low-value background information, aka the “Since the dawn of time”-beginning, which creates a garden-path sentence.

Secondly, in an argument, one should be precise about which aspects one disagrees with, i.e., finding the crux of the disagreement.

The biota exhibited a one hundred percent mortality response.

All the fish died.

George Orwell lists characteristic phrases for operators, or verbal false limbs as render inoperative, militate against, prove unacceptable, make contact with, be subject to, give rise to, give grounds for, have the effect of, play a leading part in, make itself felt, take effect, exhibit a tendency to, serve the purpose of.

Instead of being a single word, such as break, stop, spoil, mend, kill, a verb becomes a phrase made up of a noun or adjective tacked on to a general-purpose verb, such as prove, serve, form, play, render.

Moreover, we should make uncertainty levels explicit. Instead of saying “I’m pretty sure,” we can say “I’m ~85% certain” that”.

However, there is a tension between avoiding domain-specific Jargon and making precise general nouns. The clear writing optima lies between being accessible while also being specific and intentioned.

“Never use a foreign phrase, a scientific word, or a jargon word if you can think of an everyday English equivalent.”

As presented in the previous section, the lack of a clear shared definition is a significant source of communication problems. This problem is especially severe when after a long and rigorous debate, it turns out that the communication partners disagreed on an initial definition in the first place. The solution is to dispute the definition first. We can either temporarily and explicitly agree on a definition or invent a new term for the specific concept.

There are two parts to a conversation—A sender and a receiver. Both can use computers to improve their communication abilities.

Clear writing is hard to learn because you get close to no immediate feedback, making deliberate practice impossible, especially because written communication is an asynchronous process.

Many apps and Chrome extensions are used for spell-checking, but few support clear writing. We can call this testing of text writing augmentation or test-driven writing analogous to test-driven software development. We test it for its potential failure during the writing process and before “deploying” new text into production. These clear writing strategies tests act as unit tests to debug different aspects of language.

A few apps support clear writing improvement suggestions to a limited extent. The best ones I came across are iA Writer, Writer.com, and Wordtune. iA Writer, for example, claims to “carefully review your text for redundancies, clichés and filler words as you type”. However, these are still single words or word groups rather than leveraging an understanding of the entire body of text and its sections, functions, and goals. 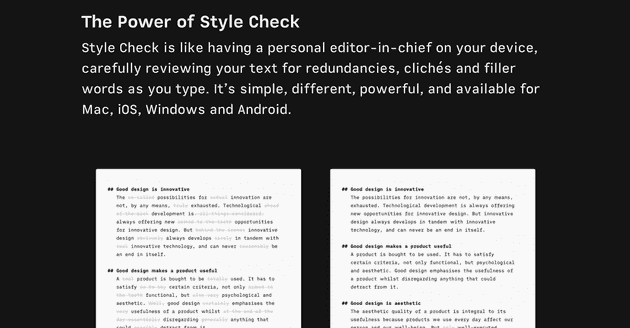 The recent advances in large language models, such as GPT-3, could test for the above-described methods for clear writing. When I write a convoluted garden-path sentence to my colleague, a chrome extension could remind me to split my argument and conclusions into paragraphs or to lead with my claim.

Parsing a text is the first part of processing information after it has been read (I’ve written about Reading Augmentation elsewhere before). Our ability to comprehend written information is essentially an advanced model for Natural Language Understanding (NLU). An NLU model parses sentences into grammatical parts, which it parses into words, which are parsed into subject-predicate and predicate-object relationships to extract their meaning.

Close to none of the current communications and writing are augmenting this parsing process to enable easier processing and extraction of information. Two examples of software that is aiding this process:

Concept Descriptor Framework: The CD-Framework of RemNote helps the user to structure concepts and their descriptors in a semantic network graph, i.e., how they are stored in the brain. (Full disclosure, I’m working on this tool and company).

Debate Tools: These tools break down argumentation in logical network graphs. They enable clear and rational argumentation, allowing us to visualize its logical structure omitting all the rhetorical trickery of a lively public debate. Unfortunately, these tools remain highly underutilized. 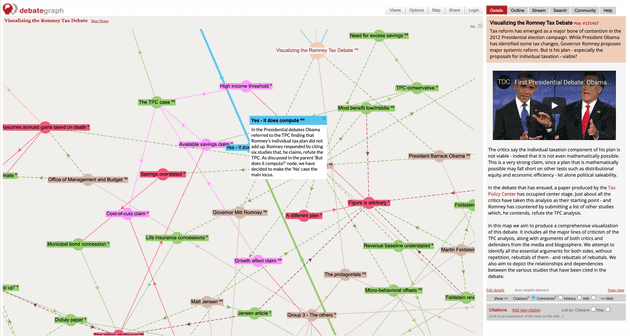 To unlock the gains of efficient communication, we have to educate colleagues and team members about the strategies for clear communication, such as structuring our writing, using clear objectives and claims, and eliminating ambiguous and imprecise language. Furthermore, we should build clear communication into our personal and company cultures.

Lastly, written communication and text parsing, i.e., reading, has a vast potential to be augmented by software.